Kingston, Jamaica: The Private Sector Organisation of Jamaica (PSOJ) and the Ministry of National Security signed a Memorandum of Understanding (MOU) between the two entities on Friday, July 31 to bolster the country’s capacity to effectively manage road safety compliance.

Under the initiative, the PSOJ will partner with the Ministries of National Security and Transport and Mining to form a Monitoring Committee that will oversee the implementation of agreed targets through the Traffic Ticket Management System (TTMS), the JamaicaEye programme and Noise Abatement Act.

The aim is to ensure that the TTMS, which will function as a centralised, web-based platform, will provide an improved mechanism for the various stages of traffic ticket management including issuance of tickets, application of payments, court fines and issuing of warrants.

The MOU further reiterates the use of JamaicaEye to monitor public spaces across the island and provide increased efficiency in responding to incidents including acts of criminality or accidents.

Speaking at the signing ceremony held at the offices of the Private Sector Organisation of Jamaica in Kingston, Permanent Secretary in the Ministry of National Security, Dianne McIntosh said, “We are rolling out these activities that we’ve set targets to and I think the support given by the PSOJ will help to identify and remove any blocks or gaps.”

“The targets are across sectors and we expect the PSOJ through public-private dialogue to raise awareness, to communicate the issues and remove the blocks,” McIntosh said.

PSOJ President Keith Duncan noted that the organisation is pleased to build on the existing partnership with the Ministry while ensuring that the solutions identified are enforced in a timely manner.

The collaboration between the two entities will also entail strengthening the framework for the Noise Abatement Act along with increased focus on the reduction of fatal road collisions – specifically among motorcyclists.

There have been 76 road fatalities involving motorcyclists as at Wednesday, July 29 in comparison to 83 motorcycle fatalities for the corresponding period last year.

Duncan noted that the partnership is in alignment with the PSOJ’s objectives for 2019/20 through its Standing Committee on National Security and Justice.

“We have seen the success of having a private sector led Oversight body for the country’s economic reform programme and are intent on delivering that same public-private partnership in restoring discipline on our roads through the Traffic Ticket Management System and JamaicaEye,” he said.

Mr Duncan also used the opportunity to congratulate the Ministry on the credibility and robustness of the strategic plan for the TTMS while urging those present to take the next steps needed for the programme’s impact on national development. 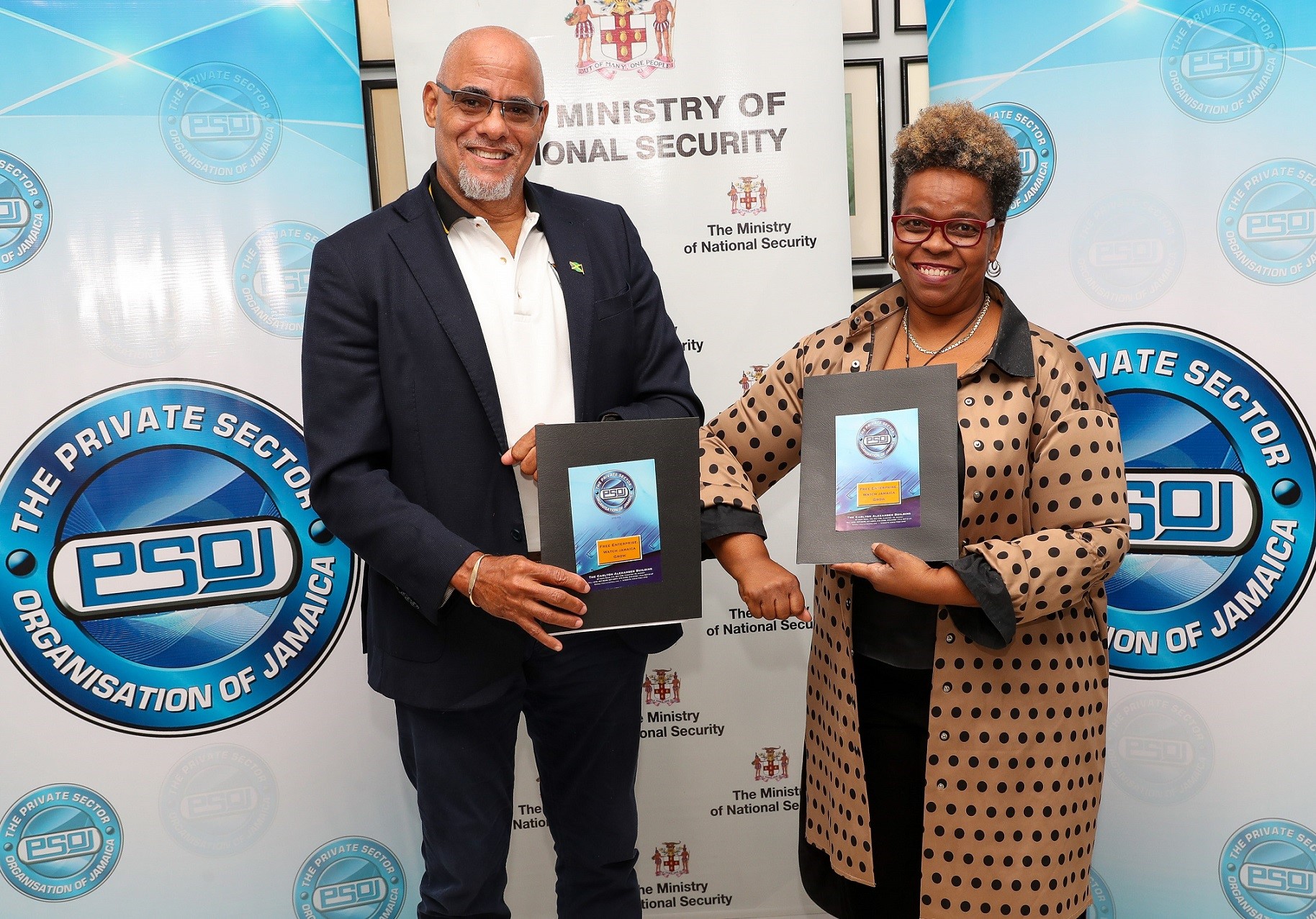 President of the PSOJ, Keith Duncan joins Permanent Secretary in the Ministry of National Security Dianne McIntosh in presenting signed copies of the Memorandum of Understanding between the two entities to reduce indiscipline on the roads. The signing took place on July 31 at the offices of the PSOJ.