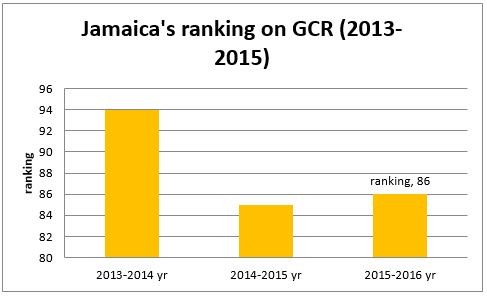 (An Evaluation of Jamaica’s Economic Performance: Effects on the Private Sector)

The Private Sector Organisation of Jamaica

The following is a brief synopsis of the PSOJ’s analysis of the Global Competitiveness Report (GCR) 2015-16. It is clear from the analysis that the areas that the PSOJ remains focused on are the main problematic areas to doing business in Jamaica, and justifies our stance. It gives us a greater foundation to push for advocacy on these issues, especially as the report shows that our ranking has effectively worsened over 2014-15.

We also recognize the improvement by seven places, from 71 in 2015 to 64 in 2016, from 189 countries. The PSOJ commends the government for its efforts in making the necessary reforms for this to happen, and is pleased that the Minister of Finance has continuously stated his commitment to not compromising the reform programme.

The improvements in the reforms (causing the increased doing business ranking) have primarily come in the following areas, with the rankings shown beside them:

These are all areas that the PSOJ has been in active dialogue with the government, and we are happy to see the improvements and the reform actions taken by the government. Despite this improvement, however, it is important to realize that areas such as Paying Taxes and Dealing with construction permits, still remain challenges with rankings of 146 and 72, respectively. This position is confirmed by the recent Business Confidence numbers, which slipped from 128 to 110, despite the feeling of optimism about the future.

With the reform programme showing positive results, the PSOJ believes that it is necessary to complement the improvements caused by the reforms, with measures that will facilitate a vibrant business environment and growth. Vibrancy at the SME level is particularly essential for the economy to show solid recovery. Growth has been the missing link in the recovery, which is essential for ultimate economic and social development.

The PSOJ’s position, therefore, is that while we recognize and commend the reform efforts, we must now work on the implementation so that these reforms can be felt on the ground. It is necessary for us to now complement the fiscal and legislative reforms with on the ground facilitation of a more competitive business environment.

In light of this we think that from a practical point of view, we must focus on the challenges in the GCR, and hence our analyzing this report below.

Only four Caribbean nations were listed on the report this year namely; Jamaica, Trinidad and Tobago, Dominican Republic and Haiti. As seen, Barbados which was ranked 55 and 47 in 2014 and 2013 respectively, was not listed. Based on Barbados’ previous rankings it suggests that they would have ranked higher than us and this would mean that if Barbados was included then our ranking quite likely would have been 86 of 141 countries, which supports the point that effectively we have fallen slightly, when compared to the total population. 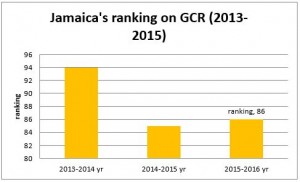 In terms of development, the country is at stage two (2) along with 31 other countries. At this stage, the country is labeled as an efficiency-driven economy; where growth is based on the development of more efficient production processes and increased product quality. This means that growth is heavily dependent on developing and maintaining efficient and effective businesses and the business environment. This indicates why Jamaica’s highest ranking came under the 6th pillar Goods Market efficiency under the category number of procedures to start a business. We were ranked number 3 out of 140 under this category compared to 32 out of 144 in 2014-2015. This no doubt is based on the deliberate action to improve the processes at the Companies Office, which was a main area of emphasis of the private sector a little over a year ago[1].

The following table[2] lists the most problematic factors preventing competitiveness and affecting the business environment. It shows that the top four factors account for 54.2% of the challenges to doing business, which were recognized as the main areas that the PSOJ should focus on. These areas are inefficient government bureaucracy, crime and theft, tax rates, and corruption – in order of most problematic first.

These are areas that the PSOJ has been advocating with the government to improve, as these can substantially improve the business environment and attract capital for investments. 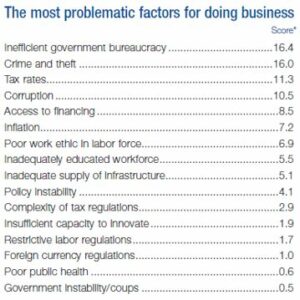 This means that in order to have a significant, positive impact on the business environment, policy and initiatives should focus primarily on these top five most problematic factors.

The PSOJ has already identified these as the primary areas of focus, along with energy, which is not as great a challenge as last year, as a result of our own advocacy which resulted in the setting up of the ESET and subsequently better order and expectation being brought to that sector.

The other challenges are being addressed by the PSOJ through the following initiatives:

Crime and theft: The PSOJ continues to work with the government and the security forces through our National Security and Justice committee[1]. A primary focus area has been identified as the reform of the justice system, as this has been cited as a major impediment to fighting crime. We also continue to work very closely with the Police Commissioner’s office. In addition, the PSOJ through the Partnership for Jamaica (PFJ) is advocating for a steering/oversight committee (with representation from various stakeholders) to positively impact this area, which various studies have shown robs us of between two to four percent of GDP annually.

Tax rates: this was an area identified by President William Mahfood, as a major  impediment to capital and investments. The president has been publicly speaking about this and the PSOJ has been consistently engaged with the TAJ and Tax Policy representatives on new tax regulations and ensuring they are as friendly as possible to businesses, while recognizing and calling for the need for greater compliance. We are not confident that this area is being effectively dealt with from a policy perspective in terms of ensuring that our tax policies and regime are internationally competitive, and is an area of continued concern as the approach to tax legislation and policy seems to be more focused on raising fiscal revenues than facilitating greater investments. It is our view that lower tax rates and a simplification of the tax system is essential if we are to attract the local and international capital needed, and encourage voluntary tax compliance, to move this economy forward, as we must understand that in this global village capital moves to where it is most productive.

Corruption: this is still a significant problem in Jamaica, and has not been a major focus item of the PSOJ. We have however recently joined with the NIA in calling for Campaign Finance Reform, which is a major source of corruption.

Below is a more general description of these factors.

Although there were minor improvements to the business environment, the country still has some social issues, which needs to be addressed before any real improvements can be seen. Despite the small improvements, economic growth is still low: the government is forecasting real gross domestic product (GDP) growth of 1.9 per cent for the fiscal year 2015/2016 and the country continues to be confronted by serious social issues or problematic factors.

Inefficient government bureaucracy had the highest score of 16.4 on the list of most problematic factors for doing business, as indicated above. This indicates that the rules and procedure, separation of functions and a hierarchical structure in implementing controls over the country is not being properly handled by the government; hence the social improvement must first begin with a political improvement by ensuring government bureaucracy efficiency. This is in line with what the PSOJ has been advocating since 2010, that a comprehensive reform of regulatory and bureaucratic processes is needed to combat the inefficiency and complexity of Jamaica’s legal and regulatory systems.

Another problematic factor is the high rate of crime and theft which is second on the listing with a score 16.0. On the Number Crime index for Country 2015 Mid-year, Jamaica was ranked 14 out of 120 countries. The country had a crime index of 67.4 which is 34.8 over the safety index of 32.6. Jamaica’s crime problems continue to be a major hindrance for achieving economic growth. The current crime problem is deterring local and international investments. Jamaica’s cyber-crime unit in particular, needs to understand that they play an important role in reducing the crime and theft level. Jamaica is now becoming popular for scamming, which is cyber-crime related.

In 2013 Commissioner Ellington stated that tremendous amount of work has been done in training police officers in the area of digital forensic investigation, and while this is commendable, the country still suffers greatly from cyber-crime incidents. The question of whether or not the training was effective lingers as the country makes efforts to combat cybercrimes such as scamming. The government needs more rigid penalties for crime and theft especially those related to cyber-crime, and a general level of discipline in the society.

Tax Rates was listed as the third most problematic factor with a score of 11.3. Yes the economy needs to grow, but further contractionary fiscal policies will only be too overbearing for the country. It is understandable and also desirable that growth of the economy needs to take place. However, creating the right mix of policies to ensure fair play is a necessity for achieving growth, otherwise the country runs the risk of losing its main players, businesses. In addition to this, consumers may also suffer greatly as economic theory teaches that business taxes will ultimately be passed down to consumers in large amounts, in order to cover business expenses. Instead of imposing new taxes, measures must be sought to ensure that all individuals and businesses pay all outstanding government payments whether tax or otherwise and continue to pay them. This way the government can see additional revenues coming in.

The implication is that the current policy of focusing on fiscal revenues, as a means of implementing tax policy, is actually causing greater hardship on the consumers and working population as tax costs are usually passed on in prices over the medium term. The introduction of the Employer Tax Credit, which saw an effective lower tax rate on Corporates, and the resulting improvement in overall corporate tax collection suggests that lower rates could be a means to improve compliance and investments, and suggest further that the current tax rates are a disincentive to economic activity.

The PSOJ continues to be convinced that substantial, or consistent, economic growth cannot be achieved until inefficient government bureaucracy, crime and theft and taxes among other factors are reduced or eliminated. These issues are consistent with the problem areas the PSOJ has been urging the government to reform. Until reductions are seen, the country will not experience the real growth as investor’s confidence is lost due to these factors.